TRENDING NEWS
Nigerian Lady Goes Under The Rain To Help School Children Cross A Flooded Marke
How Desmond Elliot allegedly cheated on his wife with Sophie Alakija’s elder sister who has...
I can’t remember the last time I ‘made love’ with a woman – Davido
Lady narrates how motivational speaker got into the pants of 16 ladies from the same...
Yahoo-yahoo is responsible for low rate of cultism, robberies in Nigeria – Seyi Awolowo
Entertainment executive, Davido has agreed that actor turned politician, Desmond Elliot, is a proof that...
Somebody died in this accident” – Craze Clown breaks down in tears following car crash...
“How heartless can people be?” – Lady laments after seeing COVID19 sticker on the carton...
I wanted to share looted palliatives on my birthday – Lawmaker SOB Agunbiade
Zahra Buhari shares post stating that Buhari shared Covid-19 palliatives and is not Nigeria’s problem
Home NEWSSports News Rooney Leads DC United To Last-Gasp Win
Sports News 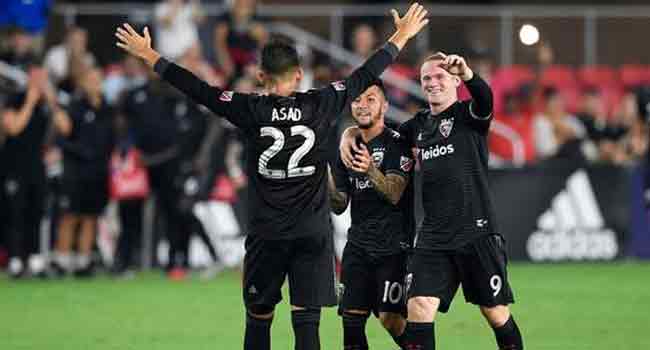 A moment of magic from Wayne Rooney fired DC United to a last-gasp 3-2 victory over Orlando in Major League Soccer on Sunday.

The two sides had appeared to be heading for a 2-2 draw at Audi Field as Orlando broke out following a United corner in the fifth minute of stoppage time.

With United goalkeeper David Ousted stranded upfield, Orlando’s Will Johnson advanced past halfway with an empty net ahead of him.

But a superb last-ditch tackle from Rooney upended Ousted, and former England and Manchester United star then launched a long ball into the area met by Luciano Acosta, who nodded home the winner.

Argentinian striker Acosta’s goal completed a hat-trick and gave United a vital three points as they attempt to move off the bottom of the Eastern Conference.

United remain rooted to the foot of the standings however with 21 points from 20 games.

United have several games in hand over the teams above them, however, and could yet conceivably mount a charge towards the playoffs in the closing months of the season.

Rooney had also been instrumental in setting up Acosta’s first goal of the game in stoppage time at the end of the first half.

Rooney, England and Manchester United’s all-time record goalscorer, confirmed his move to MLS in June after a season with Everton in the Premier League.

Neymar will come back to Barcelona, Camp Nou...

Arsenal Torreira out with fractured ankle