TRENDING NEWS
Nigerian Lady Goes Under The Rain To Help School Children Cross A Flooded Marke
How Desmond Elliot allegedly cheated on his wife with Sophie Alakija’s elder sister who has...
I can’t remember the last time I ‘made love’ with a woman – Davido
Lady narrates how motivational speaker got into the pants of 16 ladies from the same...
Yahoo-yahoo is responsible for low rate of cultism, robberies in Nigeria – Seyi Awolowo
Entertainment executive, Davido has agreed that actor turned politician, Desmond Elliot, is a proof that...
Somebody died in this accident” – Craze Clown breaks down in tears following car crash...
“How heartless can people be?” – Lady laments after seeing COVID19 sticker on the carton...
I wanted to share looted palliatives on my birthday – Lawmaker SOB Agunbiade
Zahra Buhari shares post stating that Buhari shared Covid-19 palliatives and is not Nigeria’s problem
Home NEWS We Must Appreciate God For Bringing Us Together, Says Buhari At Meeting With Kumuyi
NEWS

We Must Appreciate God For Bringing Us Together, Says Buhari At Meeting With Kumuyi 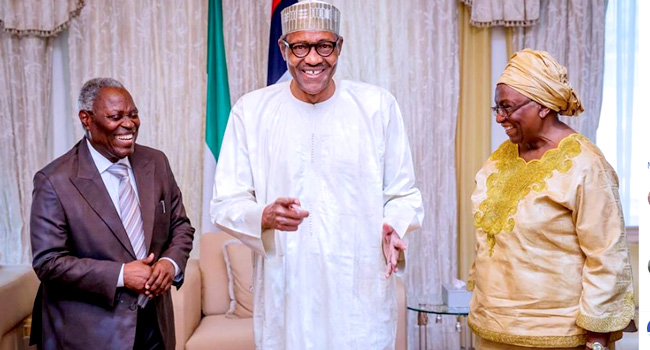 “We must appreciate God for bringing us together. He knows what he was doing. He didn’t make a mistake,’’ those were the words of President Muhammadu Buhari during his meeting with the General Superintendent of the Deeper Life, Pastor Williams Kumuyi.

He (Buhari) said “God did not make a mistake when he created over 250 different ethnic groups and decided to put them in a place called Nigeria.

“Nigerians must appreciate God for bringing everyone together”.

The President described Nigeria as “a great country’’ endowed with human and natural resources.

He said, “We have challenges in trying to get people to understand us.

“With my experience as a governor, Minister of Petroleum, Head of State, Chairman of Petroleum Trust Fund, I thought I had seen it all, but Nigeria has a way of going at its own speed.

“My morale is raised by your visit. I very much appreciate it.’’

President Buhari recalled what he described as Pastor Kumuyi’s “intellectual achievements’’ as a scholar and university lecturer before going into full-time ministry.

He said he was “excited a great deal’’ for the General Superintendent’s acceptance of government’s invitation to preach the sermon at the country’s 58th independence anniversary.

“Thank you very much,’’ the President said.

In his remarks, Pastor Kumuyi, who leads one of the country’s largest Pentecostal churches, said it was an honour to be received by the President on a busy day as October 1.

He told the President that he appreciated the government.

“Please remain focused and courageous and do what is right. Not everyone will support you publicly, but we are praying for you so that your tenure will be one of progress and prosperity for the country.’’

NYSC Announces Date For 2017 Batch B Stream One Passing-Out

Aisha Buhari Reveals What Nigerian Artistes Did For Buhari | HAPPYNAIJA November 4, 2018 - 6:13 am

[…] READ MORE: We Should Appreciate God For Buhari […]