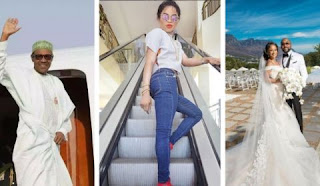 “Google it” has become the mainstay phrase when looking for information in our digital-rich age. Ever since technology became a thing, the dependency on web-based information has multiplied at a phenomenal rate – to the point where life could come to a standstill without the internet!

(Source: GIPHY)
Google just announced the results of 2017’s most searched topics, and this offers a unique perspective on the major moments in popular culture, and top trends based on searches conducted in Nigeria.
Their ‘most searched list’ gives

an insight to what the top trending news moment for Nigerians was in the last year, as well as the new music and movies that had their attention. Given that our president has been absent for most of the year, it is no shock that people are asking Google whether he’s dead.

(Photo: The Whistler)
Nigerians have also searched for Adesua Etomi, iPhone X release, Anthony Joshua, Jenifa’s Diary and what a female hyena is called. A bit of context on that- Kraks TV conducted a vox pop asking people that question, and no one seemed to know, but gave the funniest and most ridiculous answers!
Three out of four singles (“If”, “Fall” and “Fia”) Davido released this year also made it to the list of most searched songs, and given the bangers they are, quelle surprise?
Here’s a full list of what Nigerians have Googled the most in 2017:

Most Asked Questions: Who? How? What?

“How heartless can people be?” – Lady laments...