TRENDING NEWS
Your collection is wack” – Davido’s team part, Obama DMW conceals Wizkid?
Wizkid ignores Davido’s tweet, acknowledges Burna Boy, Yemi Alade, others
Nigerian Lady Goes Under The Rain To Help School Children Cross A Flooded Marke
How Desmond Elliot allegedly cheated on his wife with Sophie Alakija’s elder sister who has...
I can’t remember the last time I ‘made love’ with a woman – Davido
Lady narrates how motivational speaker got into the pants of 16 ladies from the same...
Yahoo-yahoo is responsible for low rate of cultism, robberies in Nigeria – Seyi Awolowo
Entertainment executive, Davido has agreed that actor turned politician, Desmond Elliot, is a proof that...
Somebody died in this accident” – Craze Clown breaks down in tears following car crash...
“How heartless can people be?” – Lady laments after seeing COVID19 sticker on the carton...
Home Entertainment Cardi b engaged to offset -migos
Entertainment

Cardi b engaged to offset -migos 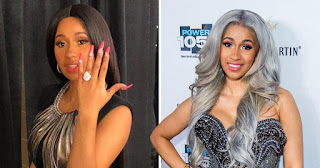 Cardi  B reacted like most women would – and we are surprised that her wig stayed secure on her head as she jumped around ecstatically.

But alas, as she has been telling us in her lyrics and Instagram videos, she is not basic.
The proposal was caught on
camera by many fans at the concert, but we got a better look at the ring on Cardi’s Instagram account. The caption read; Jesus christ I am so emotional, @offsetyrn I loveee you so much .Thank you for seeing the potential in me but since you met me .For giving me advice molding me and loving me .Your such a amazing man to me your family ,friends ,kids and you are extremely talented.I can’t wait to spend FOREVAAAA with you .Lets make a lot shmoney and love together (sic).’
Fans of the pair nearly had a breakdown earlier this week when it appeared as if the couple had broken up.
On October 21, Cardi posted a selfie Boomerang video on her Instagram story with the word ‘Single’, and then another selfie with a caption that read, ‘Peace nikka.’
But Cardi quickly had a change of heart, posting another message that read, ‘So listen babes, I exaggerated a lil bit earlier cause I was really upset and the Bronx girl in me always have to go the extreme. I came to me sense now. I’m sorry …waffle house on me?’
Turns out she thought her Offset had ‘stoled’ her favourite purple blanket.
‘Reasons why me and Offset got into it …I think he stoled my purple blanket but it wasn’t him so I’m still looking for the suspect,’ she tweeted when fans flooded her mentions about the potential split.
Die hard fans won’t be surprised by the engagement as they were convinced in September that the rapping lovebirds will be tying the knot soon.
The 25-year-old posted a super glam pic to her Instagram account on September 29, basically reminding us that she is living her best life these days, when the 25-year-old boyfriend not only liked the picture but he put a ring emoji in his comment.
Underneath the picture of her wearing a stunning long red and black Alexander McQueen jacket and thigh-high Balenciaga boots, Offset simply commented with ‘💍’ – if that wasn’t a proposal hint then we don’t know what is.
And that was not the first time Offset has used the emoji and set tongues wagging.
When Cardi B made history on September 25, dethroning Taylor Swift from the top spot, her boyfriend posted up a screengrab of Billboard’s tweet about her achievement and a congratulatory message to Cardi that featured the praying hands, fire and engagement ring emojis.
In fact, earlier this summer, rumour had it the pair were engaged but Cardi set the record straight, admitting in an interview that she wouldn’t say no if the expert in mumble rap would bend the knee.
‘Every woman, I think, wants to get married and wants to have children,’ she said. ‘It’s never too early to get married now. You know, if you want to propose to me, you can.’
But seriously Cardi, where did you get your wig from? It passed the ‘proposal test’ and stayed ever so securely on your head.
Post Views: 28
0 comment
0
FacebookTwitterPinterestLinkedinTumblrWhatsappTelegramEmail

University of Nigeria aggressively kicking students out of hostels