TRENDING NEWS
Nigerian Lady Goes Under The Rain To Help School Children Cross A Flooded Marke
How Desmond Elliot allegedly cheated on his wife with Sophie Alakija’s elder sister who has...
I can’t remember the last time I ‘made love’ with a woman – Davido
Lady narrates how motivational speaker got into the pants of 16 ladies from the same...
Yahoo-yahoo is responsible for low rate of cultism, robberies in Nigeria – Seyi Awolowo
Entertainment executive, Davido has agreed that actor turned politician, Desmond Elliot, is a proof that...
Somebody died in this accident” – Craze Clown breaks down in tears following car crash...
“How heartless can people be?” – Lady laments after seeing COVID19 sticker on the carton...
I wanted to share looted palliatives on my birthday – Lawmaker SOB Agunbiade
Zahra Buhari shares post stating that Buhari shared Covid-19 palliatives and is not Nigeria’s problem
Home NEWS Buhari Expresses Complete Disapproval of Violence In Plateau, Decries ‘Indifference To Sanctity Of Life’
NEWS 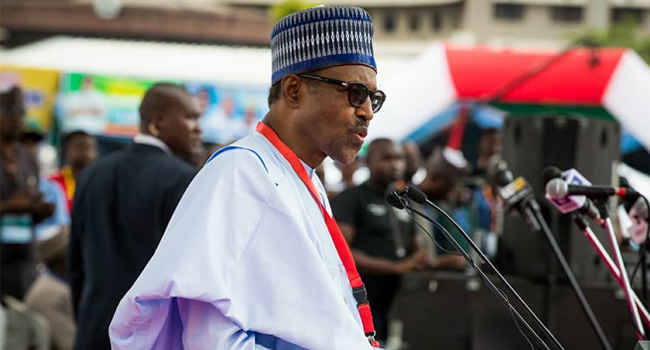 President Muhammadu Buhari on Monday condemned the violence which led to the imposition of a curfew on Jos, Plateau State capital.

“I am deeply worried about the seeming indifference to the sanctity of life by criminals whose hearts are hardened by evil,” the President said, according to a statement by his Senior Personal Assistant on Media and Publicity.

He appealed to people in Plateau to ensure that the hard efforts made by the government, through the last three and half years of the present administration in the state, to achieve a lasting peace do not go to waste.

“I know it is not an easy thing. It is a very difficult thing. But the resultant peace achieved by the people of Plateau state should not be squandered. Every citizen deserves stability and development. Peace has no alternative,” President Buhari said.

“It is my appeal to all the communities in the state capital, and the entire state as a whole to embrace peace. Where there are differences, dialogue should be used to bring about understanding. There is also the due process of the law. Differences cannot be resolved by abuses or by bullets.”

The President once again lamented that some politicians are promoting ethnic and religious prejudices for cheap popularity, despite the knowledge that such incitement could play into the hands of hate mongers.

He promised that his administration would continue to engage with stakeholders to address the root causes of this repeated violence in Plateau State and other parts of the country.

He, however, warned that no responsible government would allow anarchy to replace law and order.

We Must Appreciate God For Bringing Us Together, Says Buhari At Meeting With Kumuyi

[…] Fayose, over the years, abused and openly denigrated President Muhammadu Buhari, the leader of our party who is also the President and Commander-in-Chief of the Nigerian Armed […]

[…] of the Centenary of Armistice Day, President Buhari […]