TRENDING NEWS
Your collection is wack” – Davido’s team part, Obama DMW conceals Wizkid?
Wizkid ignores Davido’s tweet, acknowledges Burna Boy, Yemi Alade, others
Nigerian Lady Goes Under The Rain To Help School Children Cross A Flooded Marke
How Desmond Elliot allegedly cheated on his wife with Sophie Alakija’s elder sister who has...
I can’t remember the last time I ‘made love’ with a woman – Davido
Lady narrates how motivational speaker got into the pants of 16 ladies from the same...
Yahoo-yahoo is responsible for low rate of cultism, robberies in Nigeria – Seyi Awolowo
Entertainment executive, Davido has agreed that actor turned politician, Desmond Elliot, is a proof that...
Somebody died in this accident” – Craze Clown breaks down in tears following car crash...
“How heartless can people be?” – Lady laments after seeing COVID19 sticker on the carton...
Home NEWSBREAKING NEWS BREAKING:SUPER EAGLES PIP ZAMBIA,QUALIFY FOR SIXTH WORLD CUP.
BREAKING NEWS 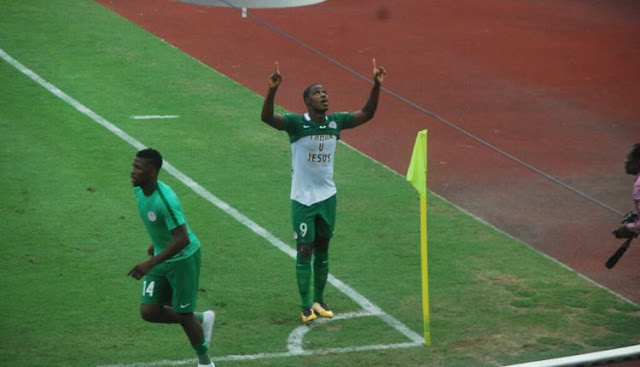 Three-time African champions, the Super Eagles of Nigeria, have qualified for their sixth FIFA World Cup, courtesy of a lone goal win over the Chipolopolo of Zambia at the Goodwill Akpabio Stadium, Uyo, Akwa Ibom State on Saturday.Alex Iwobi handed Nigeria the ticket in the 73rd minute of the fierce battle.Super Eagles’ manager Gernot Rohr stuck to the squad that ended Cameroon’s World Cup dream with Victor Moses and Odion Ighalo leading the attack, while Wilfried Ndidi, Captain John Obi Mikel, Ogenyi Onazi and Moses Simon were favoured for the midfield role.But Onazi lasted for a few minutes on the pitch before breaking his kneel.He was replaced by Mikel Agu.It remained a ding dong affair, but the Zambians won most of the battles.The visitors looked dangerous in the attack and also hit the back of the net, but it was ruled offside as scores stood at nil in the first 45 minutes.On resumption for the second half, Alex Iwobi came on for Moses Simon.The Arsenal man quickly made an impact when he broke loose on the right, but Odeon Ighalo fluffed the opportunity in the 71st minute of the tie.Moment later, Iwobi tapped in a low cross from the right and the stadium erupted, with fans chanting Iwobi, Iwobi.Ola Aina finally made his national team debut when he replaced injured Elderson Echiejile in the 79th minute of play.The Zambians attempted to turn the table, but poor marksmanship was their greatest undoing.With one game in hand in the qualifying series, Nigeria has topped the group with 13 points ahead of Zambia, Cameroon and Algeria.
Post Views: 29
0 comment
0
FacebookTwitterPinterestLinkedinTumblrWhatsappTelegramEmail

AMAZING THINGS YOU CAN DO WITH YOUR SMARTPHONE WHICH YOU NEVER KNEW.

How Desmond Elliot allegedly cheated on his wife...

Somebody died in this accident” – Craze Clown...

“How heartless can people be?” – Lady laments...