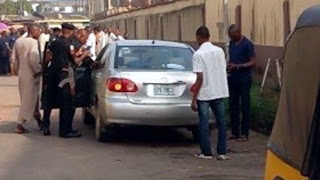 Its very bizarre, things that happen on a daily basis nowadays, A mild drama occurred early Sunday in Ogba, Ikeja area of Lagos following the mysterious death of two lovers inside a car.
A witness said the man and his alleged mistress, said to be a married woman with kids, were engaging in sex when the sad incident occurred.
The duo were reported to have driven to an area behind the Nigeria Institute of Journalism, NIJ, to engage in sex.
By the time passers-by saw them, the car engine was still running and the air conditioner was on and working, indicating they did not die of suffocation. The witnesses raised alarm and reported to the police area command in the area whose officials arrived promptly. When contacted, the Lagos State Police Command Public Relations Officer, Olarinde Famous-Cole, said the corpses had been taken to the mortuary.

“Yes it is true,” he said of the incident. “And when information got to the area command, our men raced to the scene, and conveyed the corpses to the mortuary.” Mr. Famous-Cole said the police have commenced further investigation and an autopsy would be carried out on the corpses.