written by Happynaija June 1, 2017
Now that Atletico Madrid have effectively been stopped from spending money this summer, after their Fifa transfer ban was upheld, one of the first things the club will do is throw as much money as possible at Antoine Griezmann.
They had already planned to offer him a new contract of up to £12m a year – and thereby double his wages – but that is now imperative, as is leaning on any loyalty he has to the club. Whether that will be enough to stop him moving to Manchester United is debatable, especially since they can just activate his £87m release clause, but one thing that is certain is that this Court of Arbitration for Sport decision has instantly stopped so many cogs turning in the world transfer market.
That alone has huge implications, and a lot of potential consequences for many clubs well beyond England and Spain.

On the actual pitch and in the major competitions, one of the most formidable and aggressive sides have been somewhat neutered, especially since manager Diego Simeone had seemingly made such a virtue of the kind of extra kinetic energy that comes from overhauls.
It has actually been somewhat remarkable, and defied a lot of football logic. In the time since their 2013-14 Spanish title win, Atletico have brought in 26 players and let go 26 – excluding loans – but still maintained the same hyper-combative approach and level of competitiveness despite the complexion of the first XI so changing and so many stars going. A core of players like Koke and Diego Godin has remained but it is now they could actually do with an overhaul there that they are denied the opportunity.
There had been signs they were beginning to lose some of that crackle, that they needed the fire of new signings more than ever, especially since the 2016-17 season was their worst in five years.

Simeone had planned to start that process with signings like Alexandre Lacazette from Lyon and potentially the return of Diego Costa from Chelsea, but all of that is now up in the air, at least in terms of the start of the season.
This ban actually just prevents Atletico registering players rather than buying, and they have already said they will intend to make purchases and then agree short-term loans or maybe even park players, as Barcelona actually did when signing Arda Turan from Atletico during their own ‘transfer ban’ in 2015. Your leverage in any negotiations is immediately lessened, however, if you have to immediately go from trying to persuade a player to join to then offering up a load of caveats about how they can’t actually play for the club for another few months. 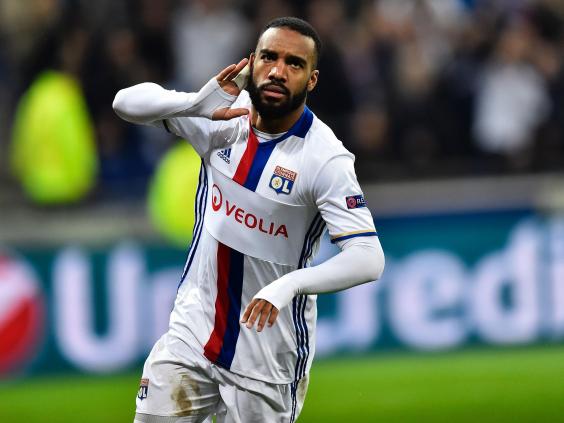 Lacazette has was tipped to move to Atletico this summer (Getty)
On the other side of negotiations, it will actually alter negotiations for any selling clubs, since they no longer have one of the big Spanish sides to point at as a potential suitor. Then there’s the ripple effect of planned moves, how one big transfer usually sets dominos in motion. Chelsea want to enhance their own forward line, for example, but that is now that bit more complicated since Costa can’t leave for the one club he actually wants to leave for. The entire market, again, has been distorted.
Lacazette may not be an absolute top-tier forward, for example, but he is a fine player with a lot of clubs like Liverpool and Arsenal interested. Would it really appeal so much to the 26-year-old to hang around for Atletico when he knows their plans have now changed?
More pressingly, would it really appeal to Griezmann to stay, given one of his primary concerns is now properly winning major trophies at the age of 26 – something that bit more difficult for Atletico, given how the start of their season will be stunted?
Illustrating how complex that deal still is, there are sources close to negotiations who have completely different views on how this CAS development could divert it. Some think it makes it more likely that Griezmann will stay due to how his loyalty – and cash demands – will be played on; others think it will just convince him the time is right to go.

What happens with one of the summer’s big sagas remains to be seen. One of Europe’s big clubs, however, have just been levelled.
It changes the market, and changes the landscape.
Post Views: 37
0 comment
0
FacebookTwitterPinterestLinkedinTumblrWhatsappTelegramEmail

A Comprehensive Guide to the Fall 2016 Fashion Trends