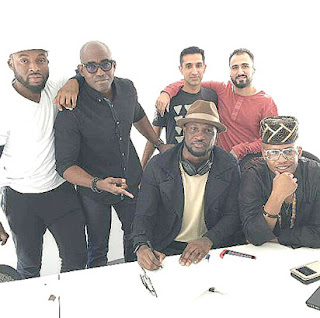 Peter Okoye, one half of former music duo P-Square has signed a partnership deal with
Empire, an American distribution company and record label based in San Francisco, California, USA. Peter Okoye with the Empire company crew The singer who now goes by the name ‘Mr. P’, shared the news on his Instagram page. He wrote: “Thank you Lord RepostBy @empire: “Just had a digital distribution deal with @peterpsquare! The official Empire page also made a post “Welcome to the #EMPIRE family @peterpsquare! Thank you for @kingkanja for the introduction & partnership!”. The record label has worked with artistes like Kendrick Lamar, Rich Homie Quan, Cam’ron, Busta Rhymes, Shaggy, Tyga, Migos, Remy Ma amongst others. Recall that the twin brothers called it quits few weeks back with a video of them and brother/ group manager, Jude Okoye in a fight making rounds on social media.

Breaking: Agbakoba sues FG over non inclusion of S/East Zone in NNPC board